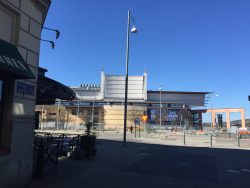 After me having been travelling back and forth between the Soldaten shows in Nürnberg and the Boris Godunov rehearsals in Göteborg, we finally made it to the premiere. 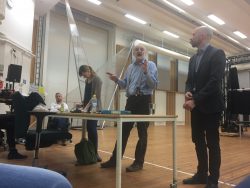 Annika Nitsch and Peter Konwitschny giving critique after a rehearsal

The director, Peter Konwitschny, with whom I had the honour of working for the Boris Godunov premiere in Nürnberg 2016 AND for die Soldaten this season, joined the rehearsals for the last two weeks and brought a lot of inspiration and thought into the direction. The main rehearsal work however was done by Annika Nitsch, who assisted Peter Konwithschny in Nürnberg.

I had a tough way up to the premiere fighting a stubborn cold but got the most lovely support from the house and from the, very musical, conductor Leo Hussain. I’m grateful for that and for my vocal chords being fit just in time for the premiere which was broadcasted by the Swedish Radio.

You can listen for 30 days on the Swedish Radio homepage

It is loads of fun to be back with this production and to share the stage with Clive Bayley, as Boris, is a pleasure every

night. I’m having a blast working with people from my student years and I’m truly curious how this production will be received in Sweden. In Nürnberg it was generally very appreciated

For the remaining performance dates, please check my calendar .

Tickets can be bought here